Writing is HARD!
So is life!
Writing about your life is about as hard as it gets.
There have been some beers,
and some pizza,
and some chips.
I'm writing as hard as I can to get through my first draft.
I'm lucky to have a friend like Dana who is willing to take the chance to work with someone like me on a project like this.

Digging up all my old memories has been difficult, both emotionally and chronologically.
So much has happened in my lifetime, it's been quite a chore putting it all down on paper.
I definitely want to write a book when I'm done with this show AND I have great ideas for TWO more shows:

First, I have to get through all this Blood!

DRUGS:
(they were here before you & they'll be after)
The first time I went to Oshawa was to go to the methadone clinic for a program intake appointment.  When we pulled into the parking lot, there was a small crowd of people hanging out behind the building.  As we parked and got out of the car we seen a guy come racing around the corner and quickly join the group.  One member of the group gave their new friend a handful of cash and produced a paper coffee cup from his knapsack.  At this point, the newcomer proceeded to induce vomiting into the cup and then, to our surprise and utter amazement, his customer eagerly tipped back the cup and drank it all down.  He even tapped the bottom of the cup so as to not waste a single drop.
I started the program at a 60mg dose.


GHOSTS:
(You don't have to believe in them, they believe in you)
We always seen this guy peeking in on us at the apartment on Queen St.  He fooled Kenny every time when he would go into the bathroom to spy on her in the shower; she always thought it was me.  I was just bored of him always looking through the crack of the bedroom door, I felt embarrassed for the poor shy, quiet and awkward ghost guy.  After some time he started to get frustrated and built up the nerve and/or strength to start moving things around the place.  His favorite games included knocking everything off the shelf in the bathroom while we were sound asleep in bed and turning on the kitchen radio while we'd be watching t.v. in the living room and then turning off the t.v. when we'd get up to turn off the radio.  I spoke with my Great Aunt Mary who was among the eldest in my family with the most experience regarding this sort of unnatural phenomena.  Mary told me if the spirit was bothering us we had to tell it to leave.  The next time we were lying in bed and heard all of the bathroom shelf contents spill into the sink and onto the floor, I spoke out loud to him.  I told him we weren't impressed and didn't appreciate him messing with our stuff.  Soon he appeared in the crack of the bedroom door, peeking in all shy as he usually did.  I continued to tell him that we lived here now, we'd done him no wrong and if he planned on continuing to bother us, we'd have to insist that he leave immediately.
There was nothing.
Then the door flew open and he landed right on top of my chest.  we couldn't see him but Kenny could see as well as I could feel myself being pushed into the mattress under his full weight.  Her eyes widened as she watched this happening to me and I couldn't breath.  He held me there for a frozen moment in time and then flew out the swinging door and was gone; forever.

On Monday I had the day off for 'Canada Day'.  We had a nice visit from my Brother's ex girlfriend (one we like, not the dirt devil). I took my older Daughter to watch fireworks.
On Tuesday I drove back to work, afterwards I went back into the gym, had dinner with my Mom & Sister, and then played with Pepperoni Pizza Cats in the Fever Pitch competition at Bad Dog.
(we won by 1 point!)
On Wednesday I spoke with Dana on the phone and she had some wonderful notes on the work so far and for moving forward.  She's so smart!
On Thursday I bought a 'vype e-pod' vaping device with nicotine and stopped smoking cigarettes!
I hope to ween off and be done with it once and for all.
When I got home I wrote (and watched tv)
On Friday I went to the doctor's to get my note for missing work.  Kenny was at work so I had to take the kids with me.
Diagnosis:
Lateral Epicondylitis (tennis elbows?) & tendinitis (carpal tunnel syndrome)
splints + acetaminophen + voltarin gel + stretches.
I had to buy 4 splints; 2 for my forearms to wear in the day and 2 for my wrists/hands to wear at night.
On Saturday we met back up with my our friend and her her daughter for birthday ice cream!
I wrote like a mad man through some of the toughest material in the show.
On Sunday I went to work... 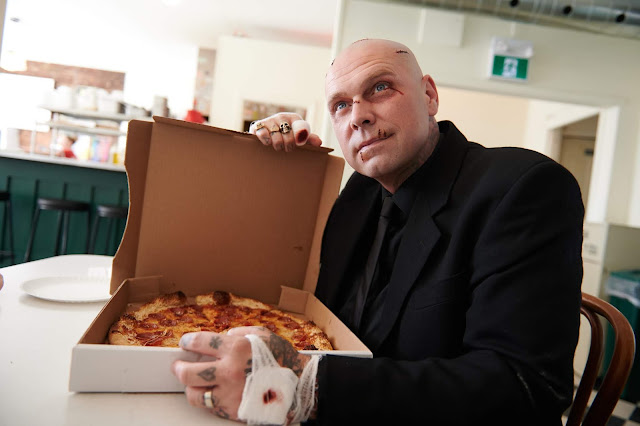